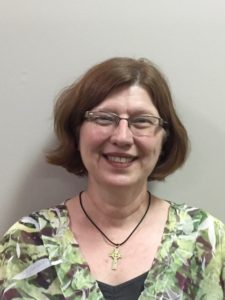 It’s about the stories! Whether it’s about God or church or music or cooking or cats, Rev. Donalee Williams is a story-teller at heart.

In her heart Donalee carries stories of being a daughter and granddaughter of ministers, daughter of a piano teacher and sometime choir director, a child of the manse, in small towns in southern Ontario, and a descendant of Scots and German immigrants. She remembers the sound of the Gestetner (old-timey copier technology) and the smell of the ink when she helped her dad fold bulletins for Sunday as a special treat. She remembers the sweetness of cotton candy at the annual Lion’s Club Carnival in Dunnville, near her family’s summer holiday home, and driving over to Vineland every August to buy peaches.

Donalee enjoyed a 25-year-career in radio news broadcasting in and around Toronto: there were so many stories to tell. Those early years of career and marriage were busy ones, and like many young adults Donalee and her spouse Ian didn’t find much time for church. However, when they became parents in their early 30’s and then joined a church community, she discovered how much God continued to be part of her story, and how God was calling her to begin a new chapter of her life as a minister. It was definitely a surprise!

After graduating from Emmanuel College in Toronto, Donalee was ordained in 2010 and then moved with her family from their home in Mississauga to Fort McMurray, Alberta. Donalee was blessed with nearly 9 years of ministry with First United Church, through joys and challenges, including the experience of being church during the wildfire of 2016. Living through this exodus, exile and return was for her a defining story of God’s presence through trauma and recovery, and through generosity and care offered by friend and stranger. The words of the United Church Creed, “we are not alone” was written on her heart as never before.

Moving to Grimsby in 2019 to serve with the people of Trinity United Church has been a return home for Donalee, moving closer to family and friends, and she is delighted to be part of an active and welcoming community of faith, and a town rooted in history and the bounty of the earth.

For Donalee, worshiping together at Trinity, welcoming and singing and praying and speaking and listening, all bind us and nurture us in the stories of our faith. Sharing leadership with talented and generous volunteer and staff teams is a gift of weaving the diverse stories we bring to our various ministries and service to God and neighbour and one another. When visiting and meeting in our homes or at the church building or even in the parking lot, we share our precious stories. When gathering around tables, whether for a pot luck or a tea or a working supper or Christ’s table, we are fed so abundantly in body and spirit, and in all these things we give praise and thanks that we are God’s people, and part of God’s story.

Kimberly joined the team at Trinity in June 2018 and is thrilled to be part of such a vibrant church community.  She was trained at the Royal Conservatory of Music in Toronto and plays piano, organ, flute, ukulele and rings handbells.  She has taught piano and theory and has experience in both traditional and contemporary church services.  Kimberly has collaborated with vocal and instrumental soloists as well as choirs performing in a broad range of musical styles.  She has volunteered at the Dorothy Ley Hospice in Toronto providing music for the residents and staff.

Her position at Trinity involves playing many instruments, conducting the choir and handbell ensemble and working with the music team to provide a varied mix of music to enhance and support the services of worship.

Kimberly resides in Toronto.  She is a trained Dental Hygienist and enjoys running and all things creative.

Karen is very happy to be a part of the Trinity United Church Office since 2011. Karen was born and raised in Grimsby. Her history with Trinity started with her Grandparents, who were very involved within Trinity including Sunday School.

Annette Newton is a Chartered Accountant who brings a great deal of experience and knowledge to her Trinity position since 2011. Besides holding down other part-time accounting positions, Annette is a busy leader with Sparks and Guides. Annette manages to keep Trinity’s finances under control with her experienced guidance for all committee chairs and other people who handle money on behalf of Trinity.

William or Bill (answers to both) LeGood grew up in the heart of Niagara, in the small town of Fenwick. After graduating from E.L. Crossley S.S. with his very technical skills, he entered the work force in fabrication/construction/boat building. After several years, he became interested in the arts and the advertising industry where he relocated to Toronto and enrolled in graphic design at George Brown College majoring in Advertising Design.  He graduated in 1992 and has worked with some of Toronto’s largest advertising agencies over the last twenty five years as an Art Director.

William now resides here in Grimsby.  He still freelances and  enjoys acting.  Has had the pleasure of working in television, theatre, movies and commercials.  Since becoming a Trinity member in 2000, he has been actively involved in the youth and church school.

Staff From Trinity’s Historic Past to Present